Sometimes you train like crazy for an event. Nervous energy and excitement build as race day approaches. On race day, you to put every possible effort into running fast from start to finish.

The Big Woods 50K was not one of those events. Yet it delivered one of the most fun and rewarding running experiences of the year for me.

Never heard of the Big Woods 50K? Don’t feel bad. Now in its third year, about 40 athletes toed the line at the start on Sunday morning, double the amount that ran in 2017. As a self-proclaimed “fat ass” event, this event aspires to be a relaxed, low key, loosely organized, adventure run rather than a high pressure, competitive race. There is a great tradition of fat ass ultrarunning in the United States, but I never experienced it — until now.

A highlight for me was the route that linked Coventry Woods Park, Woody’s Woods, Warwick County Park, a nice stretch of the Horseshoe Trail, and French Creek State Park. I’ve ran or biked in all of them at one point or another, but I never linked them all together like this.

Hosted by the Big Woods Running Club, this race didn’t even have an entry fee. $10 for a t-shirt, food for the potluck, and an optional donation is all that was asked. Each runner was treated to so much in return. Trial maps, turn-by-turn directions, well-marked trails, 3 stocked aid stations, and a post-run bonfire feast were all included.

Even better than the awesome route was the relaxed nature of the event. Free from the racing mindset, I could really focus on interacting with the people around me and the environment in which we were running. The five-hour event passed very quickly as we traded stories. I spent nearly all of the run with three other runners, one of whom I’ve followed on Strava most of the year but never met in person. I learned so much from their races stories and all the awesome places they have traveled to. My bucket list of places to visit for “runcations” just got bigger.

And it didn’t end when we crossed the finish line. A huge spread of “pot-luck” food awaited finishers. I think I counted 12 crock pots. And a huge bonfire provided refuge for athletes rapidly cooling off in the 34-degree temps.

It is hard to compare big races with social running in the woods. And why should we? The variety is exactly what makes the sport of running so awesome. We can compete in short distances on the track, long distances in the woods, fast races on the roads, slow races in the mountains, team races on cross-country courses, obstacle course races just about anywhere, and “fat ass” events where speed doesn’t matter as much as camaraderie and community. What new running event are you going to try in 2019? 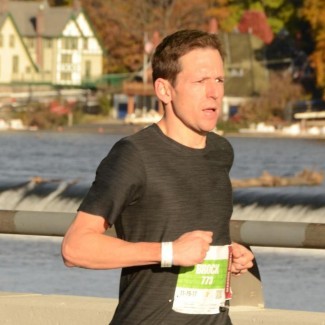 Brock is an athletic coach and elite competitor who focuses on running events from 1-mile track races up to 100-mile ultramarathons. He won the 40+ masters division at the Philadelphia Marathon in 2017, the Blues Cruise 50K Trail Ultra race the same year, and the USATF Masters 3000m Indoor nationals and Cherry Blossom 10 mile race in 2018.

Brock’s passion is helping athletes of all ages gain satisfaction and confidence by fully expressing their potential as a runner. He started Run Expression, Team Run Xpress, and the Runner’s Toolkit to provide athlete education, coaching services, and a social community in the Philly region.